Don Cheadle- An American Actor, Producer, Director, and Writer, Who is Best Known For His Role As James Rhodes in ‘Iron Man 2’

Who is Don Cheadle?

Don Cheadle is an actor, film producer, director, and writer. He is best known for his portrayal as James Rhodes in a superhero film based on the Marvel Comics ‘Iron Man 2’ in 2010. He first made in debut in 1985 as a worker in Juicy Burger in the movie ‘Moving Violations,’ which is a comedy film. Don came in the limelight in 1995 when he did the movie ‘Devil in a Blue Dress’ as Mouser Alexander. Moreover, for the film, he received the Best Supporting Actor by the Los Angeles Film Critics Association. Apart from acting, he also co-produced in the Oscar-winning Best Picture ‘Crash’ in 2004.

Furthermore, he has worked with the United Nations to address concerns on climate change and the genocide in Darfur and Rwanda. Don is also an author, he has co-authored the book ‘Not on Our Watch: The Mission to End Genocide in Darfur and Beyond’ along with activist John Prendergast. Additionally, he is also an environment lover, so he co-founded an organization or project that focuses global attention to prevent mass atrocities on humanity named ‘Not on Our Watch Project.’ 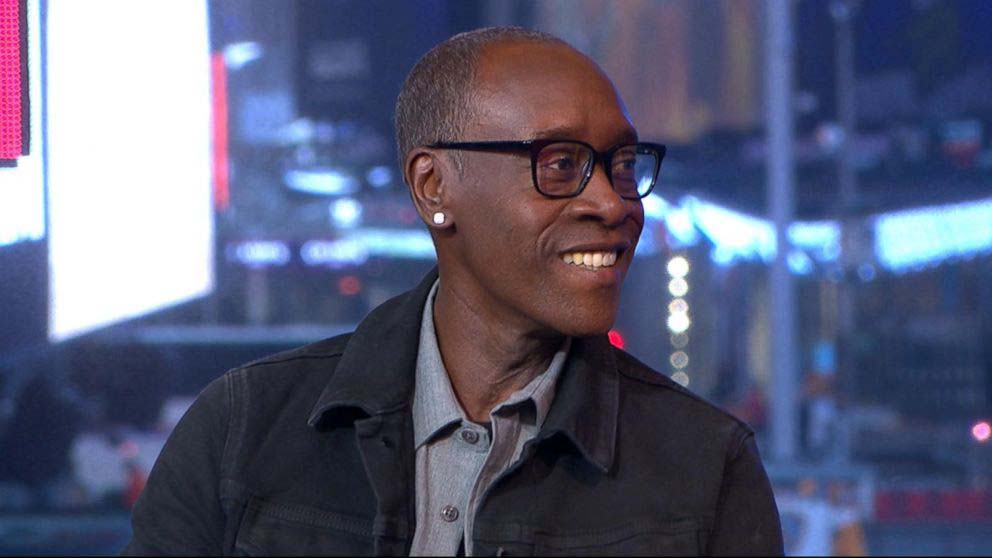 Don was born on November 29, 1964, as the name Donald Frank Cheadle Jr in Kansas City, Missouri, the U.S. His father, Donald Frank Cheadle Sr., was a clinical psychologist, and his mother, Bettye Cheadle, was a teacher. He was brought up with his two siblings’ Cindy and Colin. He is currently 55 years old and has a Sagittarius birth sign.

Don Cheadle holds nationality and follows the American Muslim religion. He is of African trait/race. Besides this, he stands 5 feet and 8 inches (1.74m/174cm) tall and weighs around 74 kg (163lbs). He has a pair of brown-colored eyes with black hair color.

Don Cheadle attended his primary school in Hartley Elementary School in Lincoln, Nebraska, from 1970 to 1974. He completed his graduation from East High School, Denver, Colorado, in 1982. The actor had an interest in acting from his school days, he used to actively take part in dramatics and performed in many plays. Also, he learned to play the saxophone and was a member of a jazz band. For his bachelor’s degree, he attended the California Institute of Arts. He certified having a degree in Fine Arts. He participated in several auditions and landed with a recurring role in the television serial ‘Fame’ when he was in college.

Don Cheadle decided to pursue his career in acting when he was a child. He made his big-screen debut in the comedy film as a worker in Juicy Burger in the movie ‘Moving Violations’ in 1985. Then, he appeared in the 1987 movie ‘Hamburger Hill.’ Likewise, he also did ‘Colors’ as Rocket in 1988 and moved to Television shows. When he was in college, he did the T.V. show named ‘Fame’ and appeared in 2 episodes as Henry Lee. After that, he appeared on many T.V. shows like ‘L.A. Law’ and ‘Sidekicks’ in the same year, ‘Hill Street Blues’ and ‘The Bronx Zoo’ in 1987. Likewise, he also featured in ‘Night Court’ and ‘Hooper Man’ in 1989, ‘China Beach’ in 1990.

Don got his breakthrough moment when he did the movie ‘Devil in a Blue Dress’ in 1995 as Mouse Alexander opposite Denzel Washington. This movie also led him to win Best Supporting Actor by the Los Angeles Film Critics Association. Likewise, he also appeared in movies like ‘Volcano’ and ‘Rosewood’ in 1997, ‘Out of Sight’ and ‘Bulworth’ in 1998. Similarly, he had further appearances in ‘Traffic,’ ‘Mission to Mars,’ and ‘The Family Man’ in 2000 and many more. 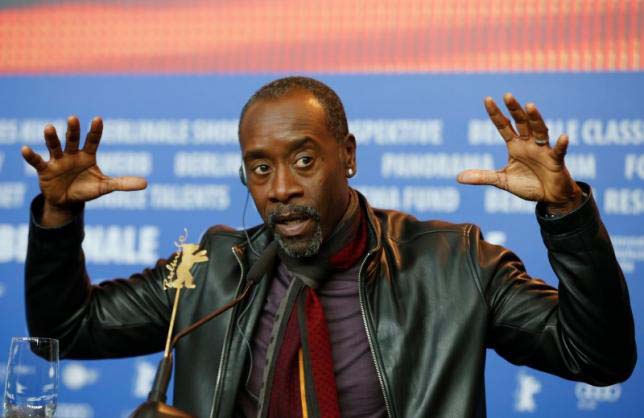 Don did many big and small films with different roles during his career. In 2010, he featured in American superhero film based on the Marvel Comics titled ‘Iron Man 2’ as War Machine (James Rhodes). He also starred in the sequel on ‘Iron Man 3’, reprising his old role. This movie earned him worldwide recognition. Moreover, in 2015, 2016, 2018, and 2019 also he again reprised his role as James in another Marvel comic sequel ‘Avengers: Age of Ultron,’ ‘Captain America: Civil War,’ ‘Avengers Infinity War,’ and ‘Avengers: End Game’ respectively. In between these, he featured in many movies and T.V. shows. Some of his notable projects where he acted and co-produced were ‘Talk to Me,’ ‘Darfur Now,’ ‘Traitor’ in 2007 and 2008, respectively. In 2015, he directed, produced, and wrote a film ‘Miles Ahead’ in 2015 and also acted as Miles Avis.

Furthermore, his recent T.V. shows are ‘Duck Tales’ from 2018 to 2020 where he lent his voice like Donald Duck, ‘Back Monday’ as Maurice in 2019 which is still running, Saturday Night Live in 2019 and ‘Ratched’ in 2020 which is still working in post-production.

Apart from T.V. and Films, he also acted in theatre in 2001 in Topdog/Underdog. He also featured in music videos like ‘Run’ in 2014 and ‘DNA’ in 2017. Similarly, he was also interested in writing. He is author of the book Not On Our Watch: The Mission to End and The Enough Moment: Fighting To.

Don Cheadle married an actress Bridged Coulter, after a long-term relationship in 1992. This couple is blessed with two daughters Imani Cheadle and Ayana Tei Cheadle. 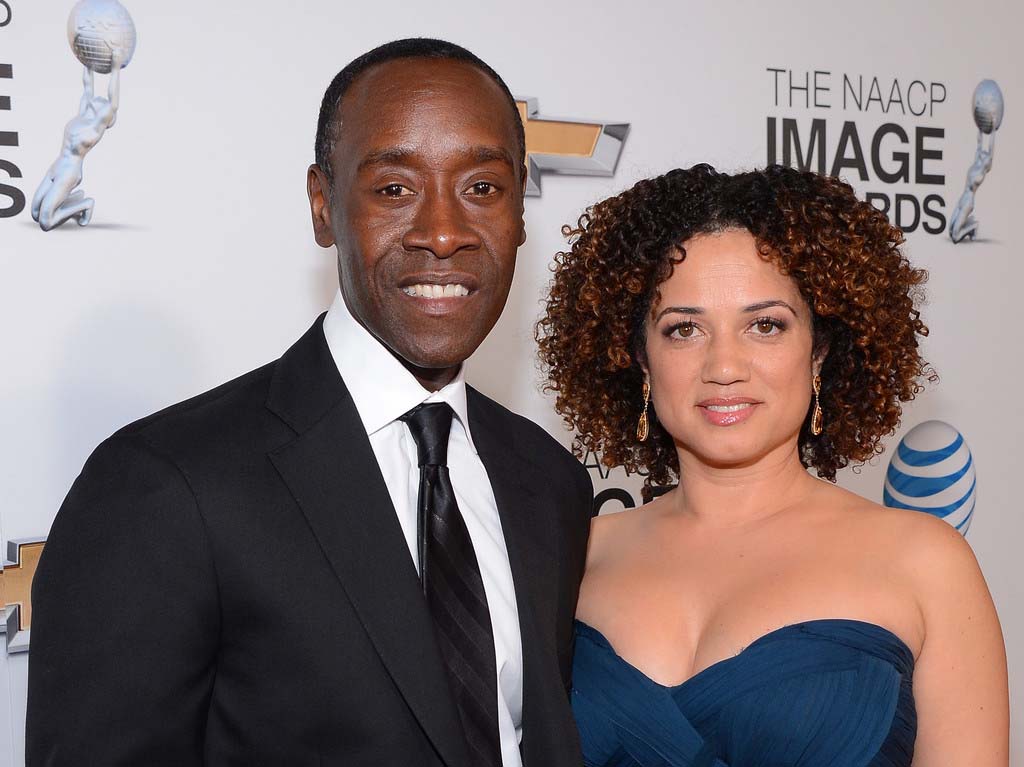 Net Worth of Don Cheadle

Don Cheadle earns from his acting career. He has appeared in numerous films. His primary income comes from working in the entertainment industry. As of 2020, his net worth is approximately $35 million.