Who is Ryan Fitzpatrick?

Ryan Fitzpatrick is an American football quarterback player who has played for the Miami Dolphins football team in the NFL (National Football League). In 2005, he was entered in NFL Draft and was selected by St. Louis Rams in the seventh round. During his career time, he has played for eight teams in total named Rams, Cincinnati Bengals, Buffalo Bills, Tennessee Titans, Houston Texans, New York Jets, Tampa Bay Buccaneers, and Miami Dolphins.

He was interested in playing football since his teenage years and decided to pursue his career as a football player. Moreover, he is also known for his occupancy as a player in eight different teams and became one of the first quarterbacks in NFL history to throw 400 yards or more in three straight games. 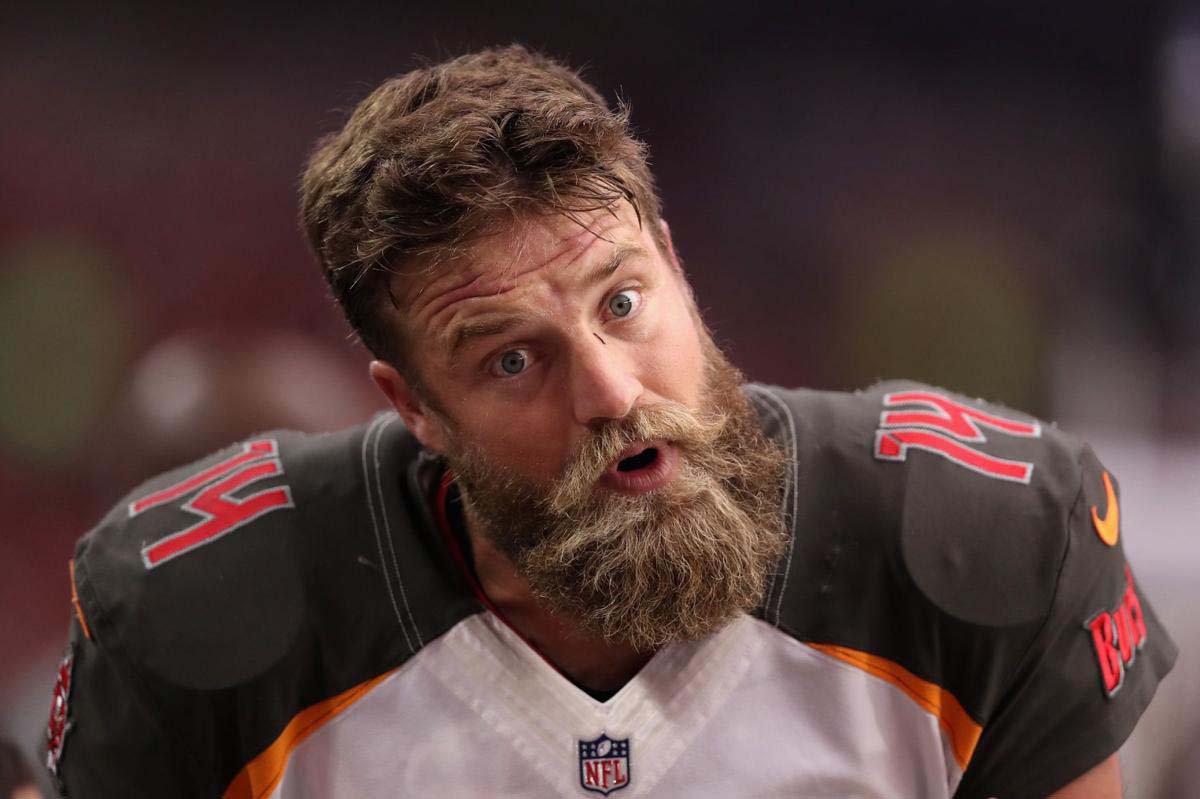 Ryan Fitzpatrick was born on 24 November 1982 in Arizona, the United States. He is currently 37 years old with a Sagittarius star sign.

Ryan Fitzpatrick holds an American nationality. Besides, he has an athletic body type. He stands 6 feet and 2 inches (188cm/1.88m) tall and weighs 103 kg (228lbs). Furthermore, he has a pair of brown-colored eyes with black hair. He also has a good length of his beard.

Ryan Fitzpatrick graduated from Highland High School and for his further studies, he enrolled at Harvard University in major economics. He also focused on being a football player and participated in the championship. He was also named as Ivy League Player of the Year and ranked Harvard by winning the Ivy League Championship. Ryan was also ranked in the second number for his pass completions, touchdowns, yards passing, and pass completion percentage.

Ryan Fitzpatrick married Liza Barber and together they have seven children in total.

Ryan Fitzpatrick does not have official verified social media accounts. 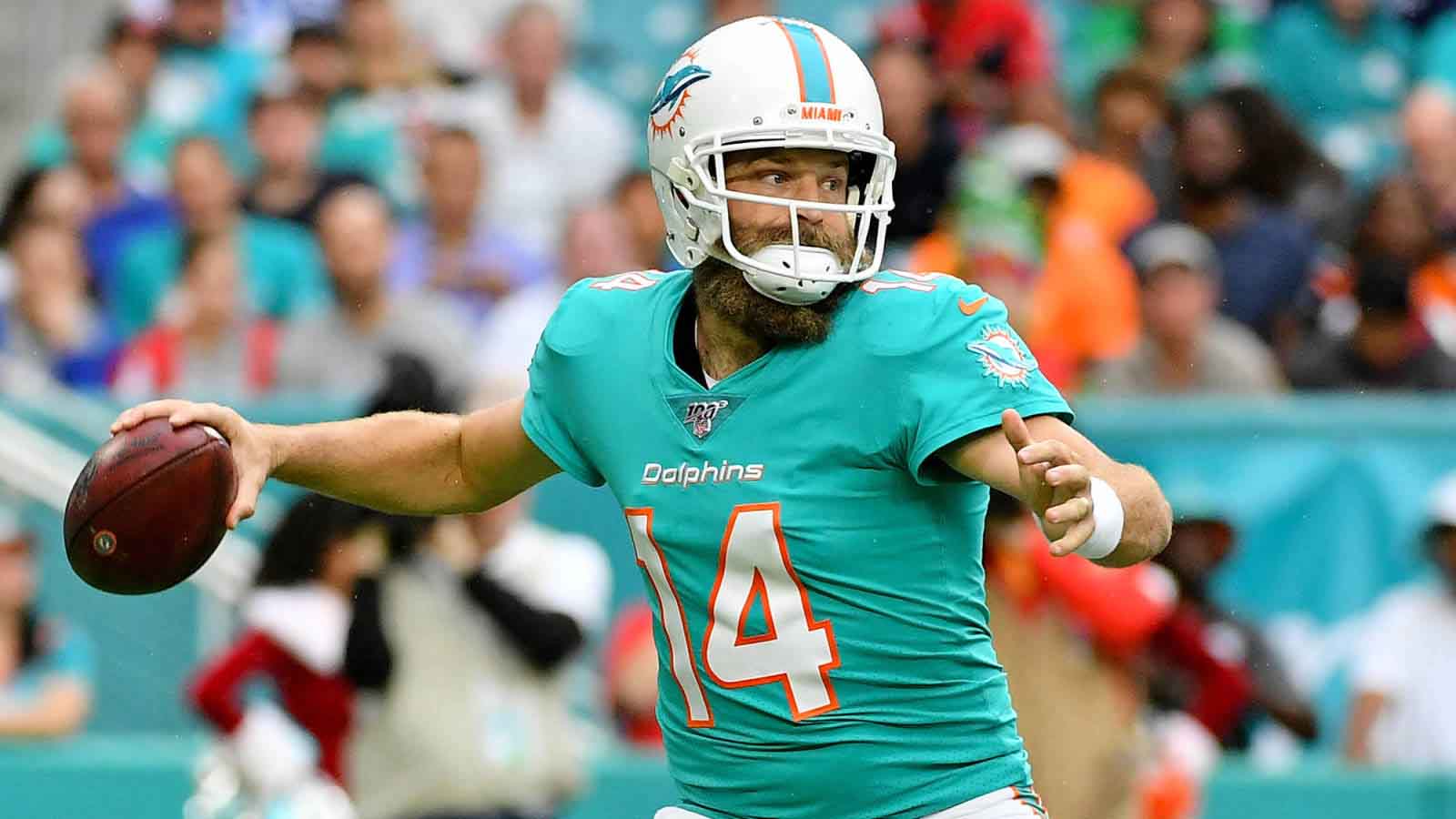 Ryan Fitzpatrick started his professional career as a football player in 2005 when he was selected in the seventh round by St. Louis Rams in NFL Drafts for three years with a contract. He then landed his first match against Houston Texans. The total score was 33-27 and led a win for his team. He was also known as Offensive Player of the Week. But in his other match, he was unable to perform as his debut match and lost against Minnesota Vikings. In the next match against Philadelphia Eagles, he was replaced by Martin. In 2006, he again appeared in the final against Minnesota Vikings and defeated then over a victory of 41-21.

Ryan Fitzpatrick was traded to Cincinnati Bengals on September 1, 2007, for the NFL Draft of 2008. Here he was made the starting quarterback of the team starting from September 28 and ended up starting for the rest of the season. He was also ranked in the third position among rushing yards quarterbacks.

Ryan Fitzpatrick then signed a contract with Buffalo Bills for three years in February 2000. His first match was against the New York Jets in the 2009 season and won against them making 16-13. Till this time he was also named as starting quarterback of the Buffalo Bills. In the 2010 season, he went against Cincinnati Bengals and won over them with 49-31. Overall, he helped this team to win several tournaments. He was released by Hills after his contract ended in March 2013.

Ryan Fitzpatrick was then signed for Titans for two years contract. He was replaced with Jake Locker. For Titans, he played 11 games out of which they bagged their victory in 9 games.

After being released from the Titans, Ryan was then signed for Houston Texans in March 2018, 2014. He played for them in 12 games and finished the season with a 6-6 record on the starting quarterback for the Texans. 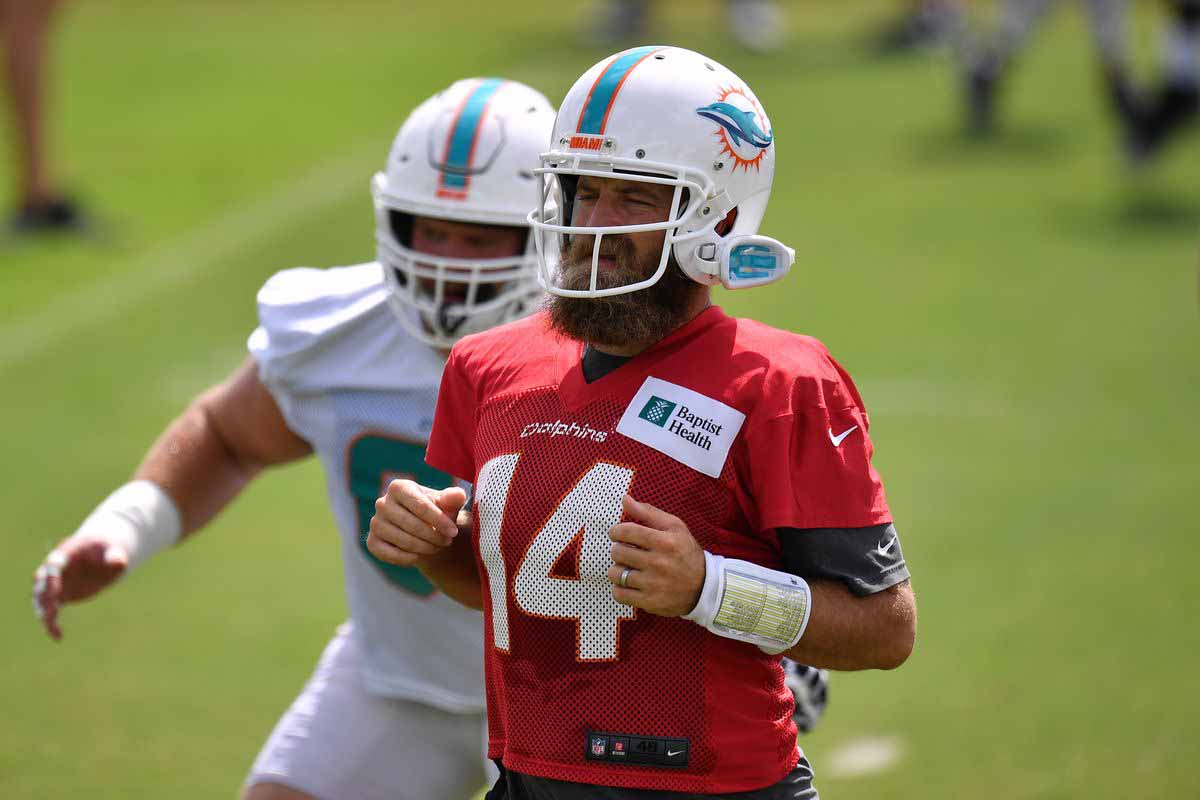 For the 2015 season, he was traded to New York Jets. He was trained under his former coach Chan Gailey. He played for this team in 16 tournaments in season 2015 and made his record for Jest with 3,905 passing yards and 31 passing touchdowns along with 15 interceptions. Likewise, in season 2016 he played in 14 games being starts in 11 one and recorded with 2,710 passing yards, 12 touchdowns, and 17 interceptions.

He recently joined Miami Dolphins on March 18, 2019. He ended the 2019 season playing in 15 games out of which winning 13 of them. Ryan also recorded with 3,529 passing yards, 20 passing touchdowns, and 13 interceptions. He was also the team’s leading rusher for the 2019 season with 243 rushing yards and four rushing touchdowns.

Ryan Fitzpatrick has won the title of the George H. ‘Bulger’ Lowe Award in 2004. He was also named as the First-team All-Ivy League the same year.

Ryan Fitzpatrick is an amazing football player who has gained a massive amount of popularity. Along with that, he has also been living a luxurious lifestyle. As of 2020, his net worth is approximately $20 million.