An American actor who is famous for his role in the NBC series 'The West Wing' as Josh Lyman.

Who is Bradley Whitford?

Bradley Whitford is an American actor who has been involved in this entertainment field from 1985 to date. He has won various awards and received many prestigious nominations for his acting roles. Initially, he started his career by acting in a small part in a television series and eventually landed lead roles in different films and series. Likewise, he is best known for his role in the NBC television political drama series ‘The West Wing,’ where he portrayed Josh Lyman. Apart from acting, he is also an activist. He conducts, hosts, and supports various programs that are caused for the welfare of the people. Moreover, his thoughts about politics are clear, and he is also a vocal critic of Donald Trump. 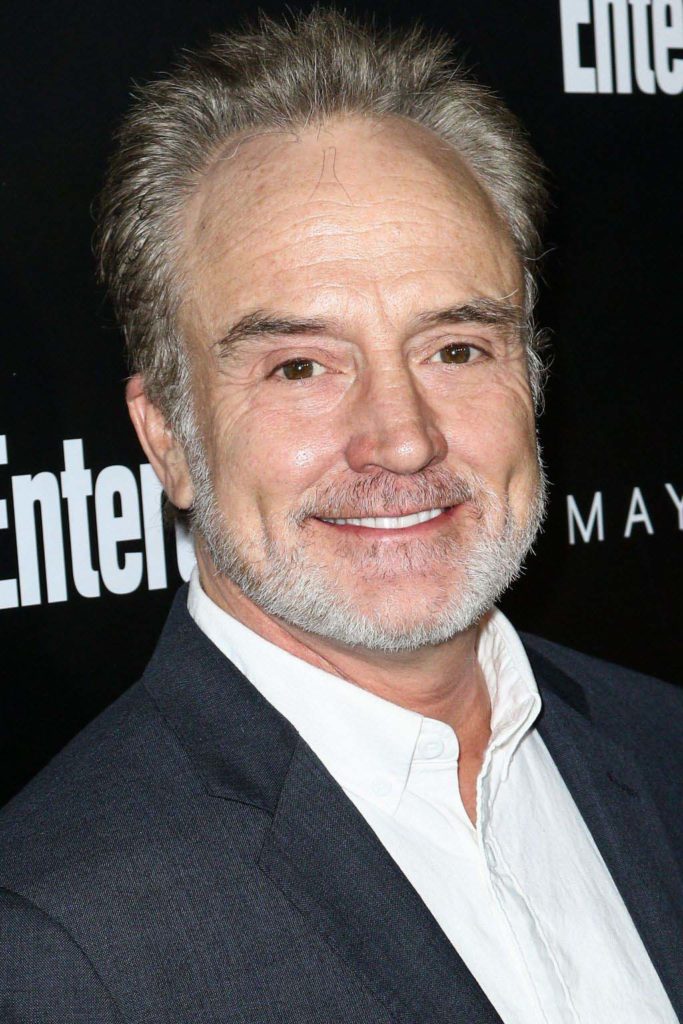 Bradley Whitford was born on 10 October 1959 in Madison, Wisconsin, United States. His parents were Genevieve Louie and George Van Norman, who have both passed away. Likewise, he grew alongside his one brother and one sister named David and Joanie in a Quaker household. Moreover, he is currently 61 years old with a Libra star sign.

Bradley Whitford holds an American nationality, and as per his ethnicity, he is White. Besides this, he stands 5 feet and 11 inches (180cm/1.80m) tall and weighs around 78 kg (171lbs). He has an average body type, a pair of brown-colored eyes, and white hair color.

Bradley Whitford completed his schooling in 1977 from madison East High School. He then enrolled at Wesleyan University and graduated in 1981 with a degree in Bachelor of Arts. His majored subject was English and theatre. Moreover, he also studied at Juilliard School, where he studied drama.

Bradley Whitford is married twice. His first wife is actress Jane Kaczmarek with whom he has three children. They married in August 1992 and separated after 16 years of marriage in October 2010. Their children are Frances Genevieve, born in October 1997, George Edward, born in December 1999, and Mary Louisa, born in November 2002.

Likewise, he then began his relationship with actress Amy Landecker in 2015. They engaged in March 2018. Moreover, they eloped and married on 17 July 2019. 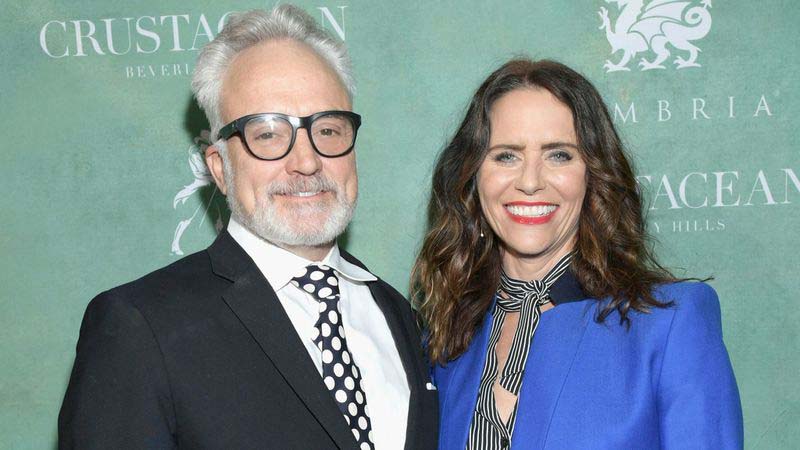 Bradley Whitford is only active in his Twitter handle with the username (@BradelyWhitford) with 407.9 thousand followers.

Bradley Whitford landed his debut acting role in the television series ‘The Equalizer’ in 1985. He then appeared in two television films, ‘C.A.T. Squad’ in 1986 and ‘The Betty Ford Story’ in 1987. From 1988 to 1998, he appeared in various series and television films. Likewise, he mostly had small roles in series where he appeared in two or three episodes. In 1999, he became one of the casts of the political drama TV series ‘The West Wing,’ which ran till 2006. He played the role of Josh Lyman, who is the White House Deputy Chief of Staff. This role earned him international fame, and he also received prestigious awards and nominations. Meanwhile, he also appeared in other series and television films. To name a few, they are ‘The Sky’s on Fire,’ ‘ Malcolm in the Middle,’ ‘Studio 60 on the Sunset Strip,’ and ‘Fathers and Sons.’

Similarly, in 2008 he appeared in two episodes of ‘Burn Up’ as James Mackintosh. This role also earned him a nomination for Gemini Award. In 2010, he starred as Det. Dan Stark in ‘The Good Guys’ shared the screen with Colin Hanks, Diana Maria Riva, and Jenny Wade. Likewise, in the subsequent years, he appeared in other series like ‘In Plain Sight,’ ‘The Mentalist,’ Shameless,’ ‘Drunk History,’ ‘Law & Order: Special Victims Unit,’ and ‘Trophy Wife.’ His other role, which brought him in the limelight, is ‘Transparent’ in 2014, which ran till 2019. He played as Magnus Hirschfeld and starred alongside Jeffrey Tambor, Jay Duplass, Judith Light, Amy Landecker, and Gaby Hoffman.

Bradley received more fan following and popularity as he grew up in his career. In 2017, he had a voice role in the animated series ‘Tangled: The Series’ in three episodes. Likewise, he also received Primetime Emmy Award for his role in the 2018 series ‘The Handmaid’s Tale,’ which is still running. Furthermore, his recently played series is ‘Perfect Harmy’ from 2019 to 2020 and ‘A West Wing Special to Benefit When We All Vote’ in 2020.

Talking about Bradley Whitford’s films, he started his film career in the 1986 film ‘Dead as Doorman.’ His other film is ‘Adventures in Babysitting,’ and ‘Revenge of the Nerds II: Nerds in Paradise’ in 1987. Similarly, in the 1990’s he appeared in different films where he had a supporting role and main role. Some of them are ‘The Client,’ ‘The Desperate Trail,’ Masterminds,’ ‘Philadelphia,’ ‘Red Corner,’ and ‘Bicentennial Man.’ Moreover, he also appeared in ‘The Sisterhood of the Traveling Pants’ in 2005, ‘An American Crime’ in 2007, and ‘The Cabin in the Woods’ in 2012. The next year, he portrayed the role of John Flynn in the short film ‘Marvel One-Shot: Agent Carter.’

Similarly, in 2017 he played in six different films, but he is most notable for his role in the horror film ‘Get Out,’ directed by Jordan Peele. The next year, he featured in the dystopian superhero film ‘The Darkest Minds’ as President Gray. Moreover, he also became one of the casts of the film ‘Godzilla: King of the Monsters,’ ‘Phill,’ and ‘The Last Full Measure’ in 2019. Likewise, his recently played film is ‘Sergio’ in 2020, where he played as Paul Bremer. Wagner Moura, Ana de Armas, Garret Dillahunt, Clemens Schick, Will Dalton, and Brían F. O’Byrne were the film’s casts. Moreover, he is an executive producer for his upcoming film, ‘Not Going Quietly.’ 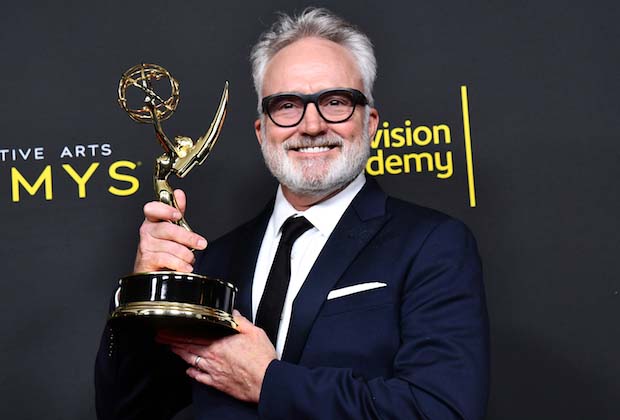 Bradley Whitford has received seven nominations from the Primetime Emmy Award, out of which he has won three of them for his acting role in ‘The West Wing’ in 2001, ‘Transparent’ in 2015, and ‘The Handmaid’s Tale’ in 2019. He has also won the Critics Choice Television Awards and  Online Film & Television Association Award in 2014 for his film role, ‘Transparent.’

Net Worth of Bradley Whitford

Bradley Whitford is an amazing and popular actor who has received wholehearted love from his audiences. His estimated net worth as of 2020 is $11 million.