An American actor, comedian and singer well known for his humorous and playful behavior.

Who is Eddie Murphy?

Eddie Murphy is an American actor, comedian, and singer who entered the entertainment field in 1976 and is still actively working at the present time. He entered this industry by performing his stand-up comedies, as he always used to mimic and entertain his friends since his childhood days. His witty nature and a good sense of humor ever made his personality cheerful. He has appeared in various movies and TV series as an actor and voice actor, which eventually made him win many prestigious nominations and awards. Apart from acting, he is also a singer and has released his five studio albums in which. His debut album is ‘Eddie Murphy, ’ which released in 1982. 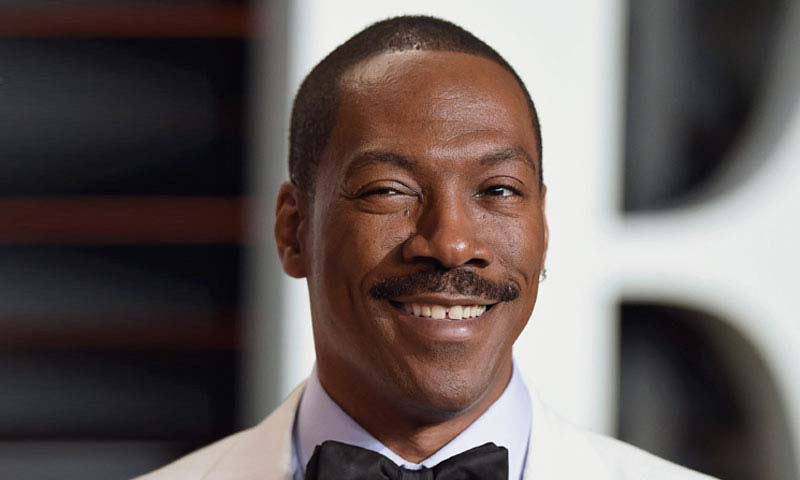 Eddie was born as Edward Regan Murphy on April 3, 1961, in Brooklyn, New York, USA. He is also called Ed and Murph by his close family and friends. He was born to father Charles Edward Murphy, a police officer, and an amateur comedian, while his mother was a telephone operator named Lillian. His parents separated when he was just three years old, and he lost his father when he was eight years old. He was raised by his mother and step-father named Vernon Lynch and his elder brother named Charlie. He is currently 59 years old with an Aries star sign.

Eddie Murphy holds the nationality of America. His religious viewpoint is Christianity and belongs to the Black ethnicity. Besides, he stands 5 feet and 9 inches (175cm/1.75m) tall and weighs around 77 kg (170lbs). He has an average body type having a pair of dark brown colored eyes with black hair color.

Eddie Murphy completed his schooling at Roosevelt Junior-Senior High School. He then enrolled at Roosevelt High School, and for his further studies, he attended Nassau Community College.

Eddie Murphy previously worked as a clerk in a shoe store and performed at local clubs and bars. 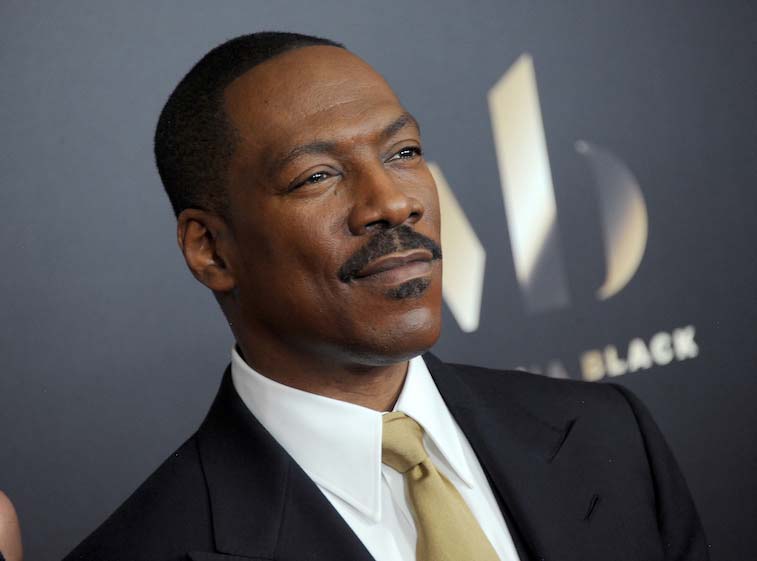 Eddie Murphy did his first audition for the late-night comedy show ‘Saturday Night Live!’ in which he got the role and was selected in 1980. He did the show till 1984, appearing in 65 episodes. He then performed his Stand-up special called ‘Eddie Murphy: Delirious’ in 1983. Also, he appeared in other TV special shows like ‘The 35th Annual Primetime Emmy Awards’ in 1983, where he was a host, and ‘What’s Alan Watching?’ in 1989.

Likewise, n 1991, he ventured a project where he created and produced a sitcom called ‘The Royal Family,’ which ran till 1992. From 1999 to 2001, he created and produced a stop-motion sitcom, where he also lent his voice in 31 episodes called ‘The PJs.’ In 2004, 2007, and 2010 he lent his voice to one of the Donkey’s characters in TV special shows such as ‘Father of the Pride,’ ‘Shrek the Halls,’ and ‘Donkey’s Christmas Shrektacular’ respectively. Recently, he appeared in a web series talk show ‘Comedians in Cars Getting Coffee’ in 2019.

Eddie Murphy landed his debut cinematic acting role in the 1982 film ’48 hrs, ’ directed by Walter Hill. In 1984, he appeared as Detective Axel Foley in the movie ‘Beverly Hills Cop’. This film brought him into the limelight as the film did pretty well. He also did the sequel film ‘Beverly Hills Cop II’ in 1987, where he was also a story writer. These two films collected a fair amount of money at the box office.

Likewise, in 1988, 1990, and 1992 he acted and wrote the story for three movies such as Coming to America, ‘Another 48 hrs,’ and ‘Boomerang,’ respectively. All these films were quite successful in terms of money collection and as well as reviews. His next successful movie came in 1996 comedy film title ‘The Nutty Professor’. This film was directed by Tom Shadyac, which became very successful commercially and also received critical acclaim. This movie made Eddie’s career to take a new path as he gained international attention. He has also reprised his role in the sequel film ‘Nutty Professor II: The Klumps’ made in 2000.

Similarly, his other notable movies during those times were ‘Vampire in Brooklyn,’ where he was writer, producer, and actor, ‘Metro,’ ‘Mulan,’ ‘Dr. Dolittle,’ ‘Bowfinger,’ ‘Dr. Dolittle 2,’ and many more.

Furthermore, in 2004 he voiced over a Donkey in the computer-animated comedy film ‘Shrek 2.’ He also reprised Donkey’s voice role in ‘Shrek the Third’ in 2007 and ‘Shrek Forever After’ in 2010. He also produced and acting in films like ‘Norbit’ in the titular role in 2007 and in ‘Dolemite Is My Name’ as Rudy Ray Moore in 2019. Recently has been working on his upcoming movie ‘Coming to 2 America’ where he is the writer of the story.

Eddie Murphy has been nominated in various awards for his different roles. He has won seven Critics Choice Award and three People’s Choice Award for his outstanding performances. Recently, in 2020 he has been honored with Primetime Emmy Award for his Outstanding Guest Actor in a Comedy Series for Saturday Night Live. 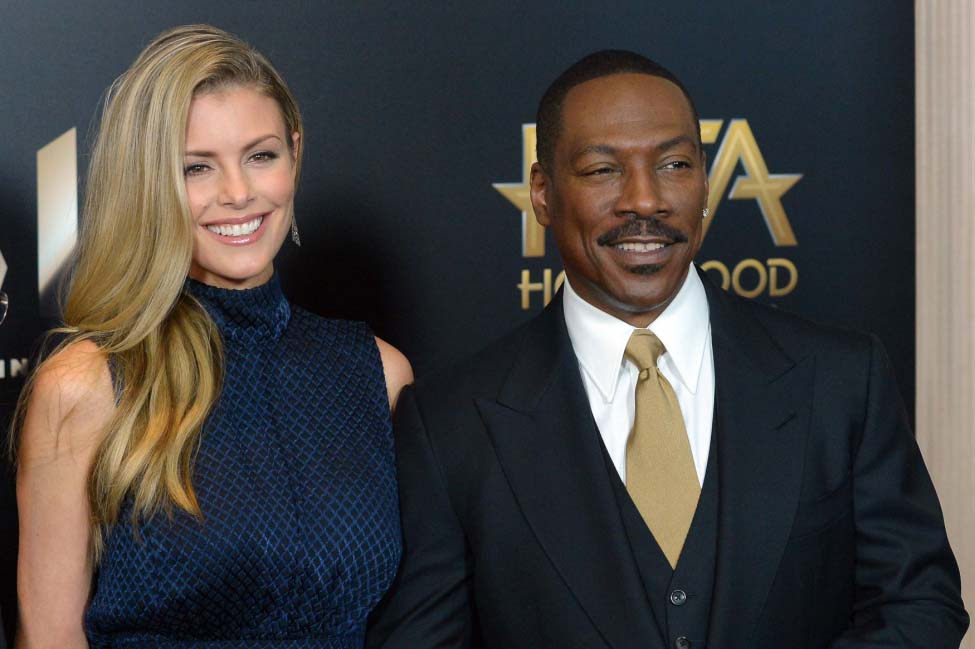 Eddie Murphy has been in a relationship with many ladies and has been married thrice. He has two sons from his ex-girlfriends Paulette McNeely and Tamara Hood, named Eric, born in 1989, and Christian, born in 1990. Later, he married Nicole Mitchell on March 18, 1993, and gave birth to five children named Bria, Myles, Shayne, Zola, and Bella. Sadly, they divorced in 2006 after living together for 13 years. Likewise, he dated Melanie Brown after his divorce and became the father of a daughter named Angel Iris Murphy Brown on April 3, 2007, on his birthday.

Additionally, he again performed his second marriage with Tracey Edmonds, a film producer, on January 1, 2008. But they broke up their wedding soon. Lastly, in September 2018, he married his girlfriend Paige Butcher, with whom he had been in a relationship since 2012. They together have a daughter born in 2016 and a son born in 2018.

Eddie Murphy is active only in his two social media accounts. His Facebook page more than 13 million likes and 12.8 million followers. Likewise, his YouTube channel is titled ‘EddieMurphyVevo,’ where he posts his songs and stand-up comedies.

Eddie Murphy is one of the famous and wealthy people in the Hollywood film industry. As of 2020, his net worth is approximately $6.7 billion.