Jason Witten – A Professional Footballer, Representing Dallas Cowboys in The NFL, Who Entered into The NFL by The 2003 NFL Draft

Who is Jason Witten?

Jason Witten is a well-known player who has been well-established in the sports from his brilliant playing skills. He is the outstanding footballer who plays from the position of tight end. Presently, he is playing for the Dallas Cowboys of the NFL (National Football League). He debuted in his professional career from the team since 2003, being selected for the 2003 NFL Draft. Earlier, he played college football for the University of Tennessee. 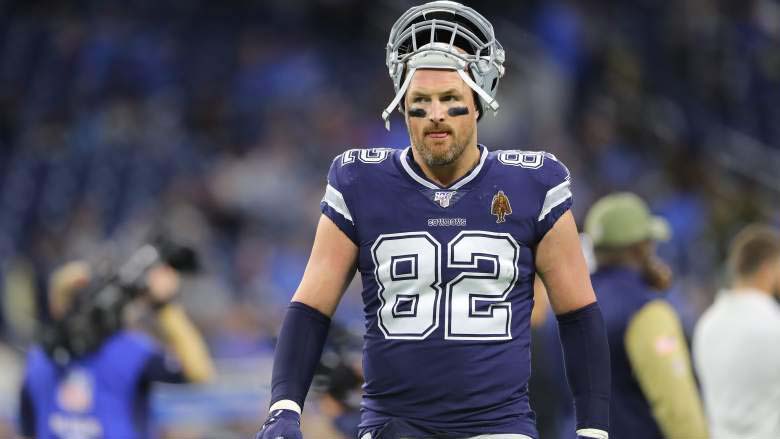 Jason Witten was born on May 6, 1982, as Christopher Jason Witten, in Elizabethton, Tennessee. He was born to his father, Ed Witten, and his mother, Kimberly Witten Barnett. Likewise, he has two siblings; older brothers Ryan and Shawn.

Furthermore, he holds an American nationality, and as per ethnicity, he belongs to White. He has the star sign of Taurus. He is Christian by religion. With a height of 6 feet 6 inches (1.98 m) and weigh about 120 kg (265 lbs), he has been able to maintain his body fit and healthy.

At an early age, when he was just six years old, his father became offensive to his mother. Then, when he became eleven, he went to live with his grandparents in Elizabethton. His grandfather was Dave Rider, who was the coach of the football team.

For his education, he attended Elizabethton High School, located in Elizabethton, Tennessee. During his school time, he started playing for the school team. He played from the position of linebacker and tight end. Jason drove the team to attain the semi-finals for three years. Moreover, during his senior year, he gained an honor of All-American and All-State. Likewise, he also became an East Tennessee Player of the Year and Region Defensive Player of the Year.

After being certified from the school, he attended the University of Tennessee in 2000. Though he accepted the scholarship from the university for dealing to play as a defensive end, he later had to play from the offensive side midway.

He had an impressive performance during his junior year. Jason had a record of 39 receptions, as well as 493 receiving yards along with five touchdowns as a tight end. Moreover, he gained honors like All-SEC and Academic All-SEC honors.

Jason Witten started his professional career being selected in the third round of the NFL Draft in 2003. At the age of 20, he entered the Dallas Cowboys as the 69th overall pick. He played the NFL match for the first time on September 7, in opposition to the Atlanta Falcons. During his rookie season, he played fifteen games.

Sadly, he had to undergo major surgery, as he broke his jaw while playing in opposition to the Arizona Cardinals. However, he missed only a game. Moreover, he became enlisted in the NFL All-Rookie Team for the season. Jason completed the season with 35 receptions for 347 yards, along with a touchdown. 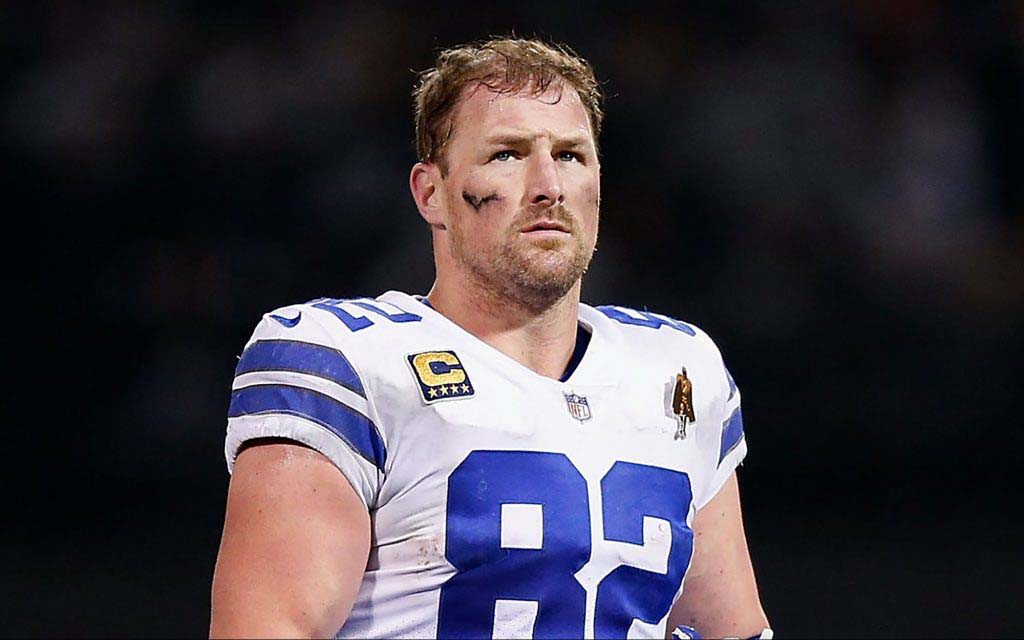 Furthermore, in the 2007 season, he made a record of 96 receptions, which became his single-season record as well as the third one to make history in the NFL. He became named for the 2007 All-Pro team, in addition to being nominated for the award “Walter Payton NFL Man of the Year.”

Though he had an injury in the 2012 season, he played excellently, which made him the second player in the franchise history and the third end in the NFL history for attaining 700+ catches. Additionally, Jason became the youngest and the fastest landing the milestone in addition to completing the season entitling his eighth successive Pro Bowl.

Jason, in the 2013 season, beat the Shannon Sharpe and became the second most receptions as a tight end in the history of NFL. Similarly, in the 2014 season, he became third tight end making a record of 10,000 career receiving yards. Likewise, playing amazingly in 2015, 2016, and 2017 season, he extended his contract with the Cowboys on March 28, 2017, for four years.

Eventually, Jason declared his retirement and enrolled in ESPN as an analyst on “Monday Night Football.” Later, on February 28, 2019, he announced his return to the Cowboys for a year.

People are always eager to know about the personal life of high-profile celebrities. Moreover, when it comes to young, dashing, and brilliant players, fans show more interest. So, here is the information if Jason is married, divorced, dating anyone, or living a single life. 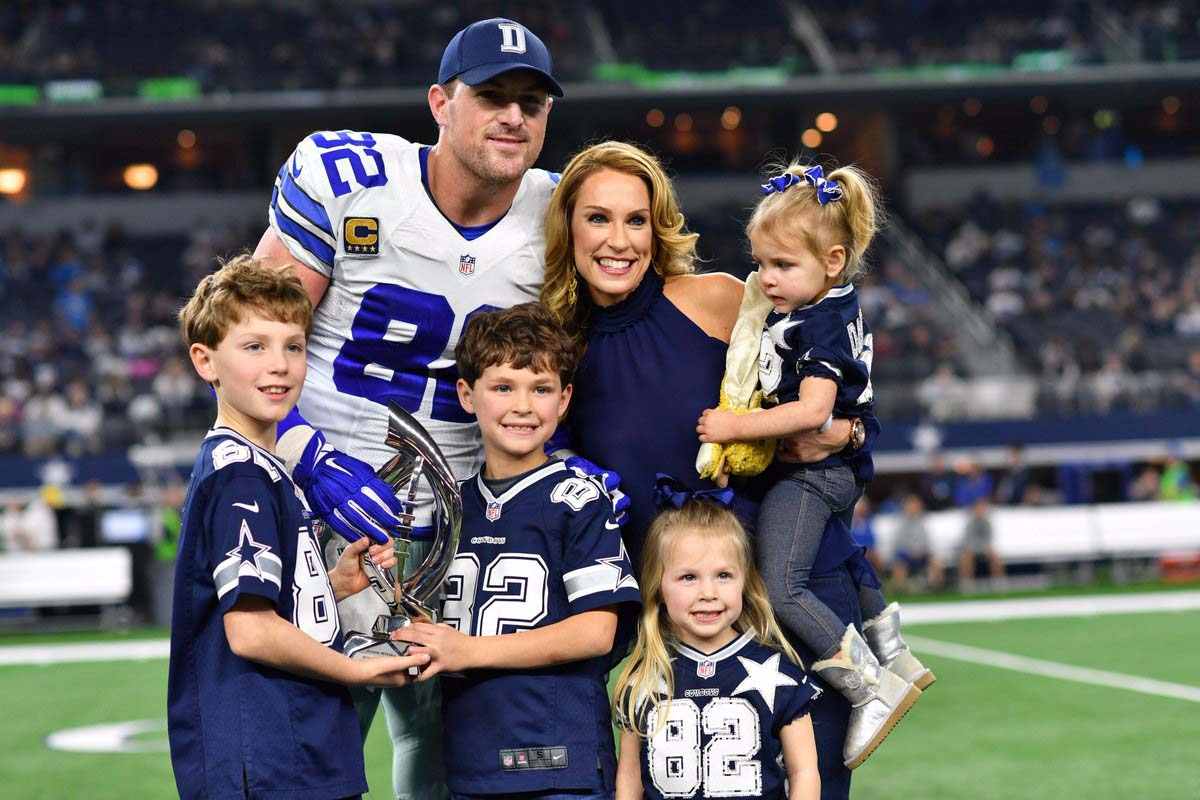 Jason is a married man. He married Michelle, who serves as a nurse at Parkland Memorial Hospital of Dallas. Also, the couple is blessed with four children; two sons C.J. and Cooper, and two daughters Landry, and Hadley Grace. Landry and Hadley were born in late 2012 and 2014, respectively. Jason, along with his wife Michelle Witten and his children, lives happily in Westlake, Texas, in Dallas.

Jason Witten, from his brilliant playing skills as a footballer, has been able to earn massive popularity. Likewise, along with gaining name and fame, he has been able to make a handsome amount of money. He has an estimated net worth of $40 million as of 2020.