Who is Tilda Swinton?

Tilda Swinton is an English actress and model who has been associated in this entertainment field from 1984 to date. She is well-known for her memorable roles in many independent and studio films. Likewise, she was interested in acting from her childhood days. Initially, she started working in stage plays and later made her professional acting debut at Royal Shakespeare Company. Eventually, she landed a film and a television role, which earned her gain more popularity internationally. Tilda is well-known for her different roles in various films like ‘Snowpiercer,’ where she played Mason. Moreover, she has also received critical acclaim and accolades for her acting roles to contribute to the film industry. 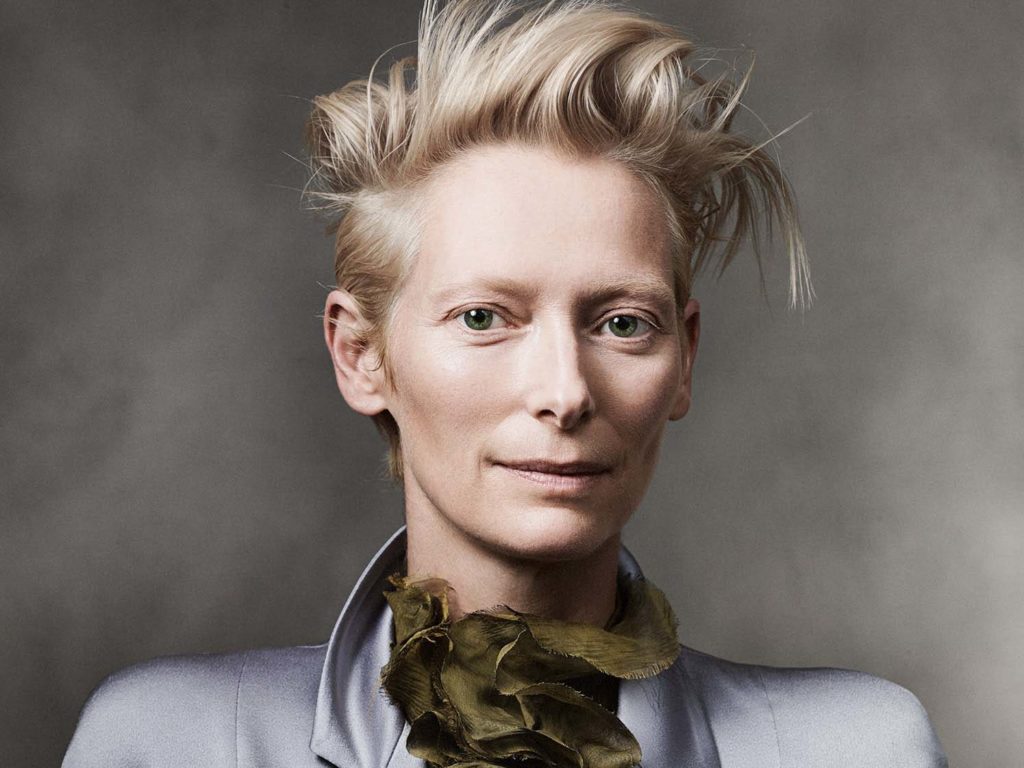 Tilda Swinton holds an English and Scottish nationality belonging to the White ethnicity. She has English, Scottish, and Northern Irish ancestry. As per her religious views, she is an agnostic. Besides this, she stands 5 feet and 10 inches (1.78m/178cm) tall and weighs around 57 kg (126lbs). Tilda’s body measurements are 34-26-35 inches, with a slim body type. Moreover, she has a pair of green-colored eyes with dyed blonde hair color. Her natural hair color is red.

Tilda Swinton has always had an interest in acting since her childhood days. She attended three different schools like Queen’s Gate School, the West Heath Girls’ School, and Fettes College, for her education. Later, she enrolled at Murray Edwards College, which is a part of the University of Cambridge. There she graduated with a degree in social and political science in 1983.

Tilda Swinton is not active on any social media platforms.

Tilda Swinton had a long term 8 years relationship with John Byrne from 1995 to 2003. This couple together has a twin named Xavier and Honor Swinton Byrne, born in 1997. After they broke up, Tilda started her relationship with a German painter named Sandro Kopp in 2004. They are still dating each other. Moreover, they have a considerable age difference. 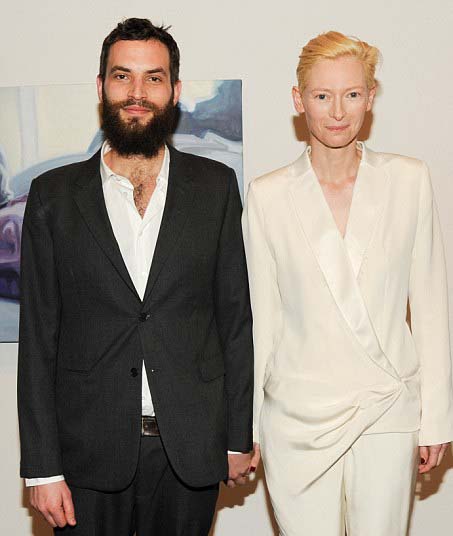 Tilda Swinton landed her debut big-screen role in ‘Caravaggio,’ a historical drama film of 1986. The next year, she appeared in two different movies called ‘Aria’ and ‘The Last of England,’ which is an arthouse film. Likewise, she had other supporting roles in the 1988’s and 1989’s movies. In 1991, she played in the movie ‘Edward II’ for which she also received the award from Volpi Cup. Similarly, her other notable films during the 1990s were ‘Female Perversions’ in 1996, ‘Conceiving Ada’ in 1997, and ‘The War Zone’ in 1999. In 2000, she appeared in a Canadian film, ‘Possible Worlds,’ where she played Joyce. The same year, she was a cast of ‘The Beach’ where she starred with Leonardo DiCaprio. Though the film did not receive good reviews, it became a commercially hit.

Furthermore, her next film was a sci-fi psychological thriller ‘Vanilla Sky’ where she starred alongside Tom Cruise in 2001. Over the upcoming years, her next films were ‘Adaptation’ in 2002, ‘Young Adam’ in 2003, ‘Constantine’ in 2005, ‘Stephanie Daley’ in 2006 and ‘The Man from London’ in 2007. The same year, Tilda received a breakthrough in her career in the film ‘Michael Clayton’ where she played Karen Crowder. This film became a massive hit that received critical success. Moreover, it also received seven nominations in the Oscar, and she also received an Oscar award for the supporting role. Similarly, in 2008 she appeared in five different films.

Tilda grew more and received more popularity internationally. In 2009, she featured and became an executive producer in the film ‘I am Love,’ which also became a hit. Likewise, in 2011 she appeared in the main cast of the film ‘We Need to Talk About Kevin’ as Eva Khatchadourian. Another huge hit was in the 2013 film named ‘Snowpiercer’ where she played Mason. It starred actors like Chris Evans, Song Kang-ho, Jamie Bell, Ko Aung, John Hurt, and Ed Harris. It received critical acclaim and gained its position in the top ten films of critics’ favorite list. Additionally, she also became part of the famous and notable films like ‘Doctor Strange’ in 2016, ‘War Machine’ in 2017, ‘Avengers: Endgame’ and ‘ The Personal History of David Copperfield’ in 2019.

She recently appeared as a narrator for the film ‘Last and First Men’ and appeared in ‘The Human Voice’ in 2020. Likewise, she is currently working on her upcoming movies like ‘Pinocchio,’ ‘Memoria,’ etc.

Tilda Swinton made her first TV appearance in the 1986 series ‘Zastrozzi: A Romance’ as Julia. She then appeared in other series like ‘Screenplay’ and ‘Shakespeare: The Animated Tales’ where she had a voice in 1992. Likewise, she also did a television film in 1998 called ‘ Love Is the Devil: Study for a Portrait of Francis Bacon’ as Muriel Belcher. After this, she took a loop gap from television and appeared in the series from 2006, where she mostly has a voice role. Additionally, some of them are ‘Getting On’ in 2012, ‘Galapagos’ in 2006, and ‘When Bjork Met Attenborough’ in 2013.

Tilda Swinton has received many prestigious nominations and awards for her significant acting roles. She has won many awards for her film ‘Michael Clayton’ under best-supporting actresses such as Academy Award, BAFTA Award, and different Critics Award. Likewise, she has also received various critics awards for her acting roles in ‘We Need to Talk About Kevin’ in 2011 and ‘Snowpiercer’ in 2014. 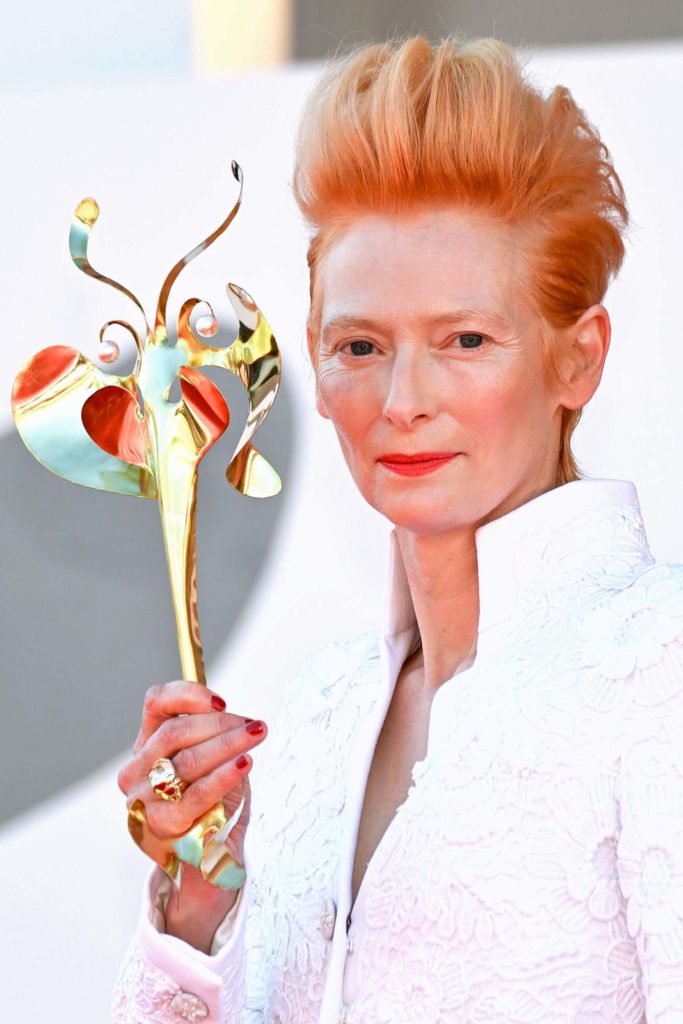 Net Worth of Tilda Swinton

Tilda Swinton is one of the oldest actresses who are still actively involved in the entertainment field. Her estimated net worth is $10 million as of 2020.