Who is Emily Blunt?

Emile Blunt is a well-established actress who is involved in both British, American films and series. She started her career in acting in 2001, and to date, she has been associated and working here actively. This actress first made an acting role on stage, and she eventually landed in playing television and films. Emily Blunt has not only been working in these fields, but she has also worked in radio, audiobooks, and web series. Her debut works, her first film, series, and stage play were in 2004, 2003, and 2000. And the names were ‘My Summer of Love,’ ‘Boudica,’ and ‘The Royal Family.’ She came into the limelight from her film role as Emily Charlton in ‘The Devil Wears Prada.’ Moreover, for her endless acting skills, she has been awarded prestigious nominations and awards. 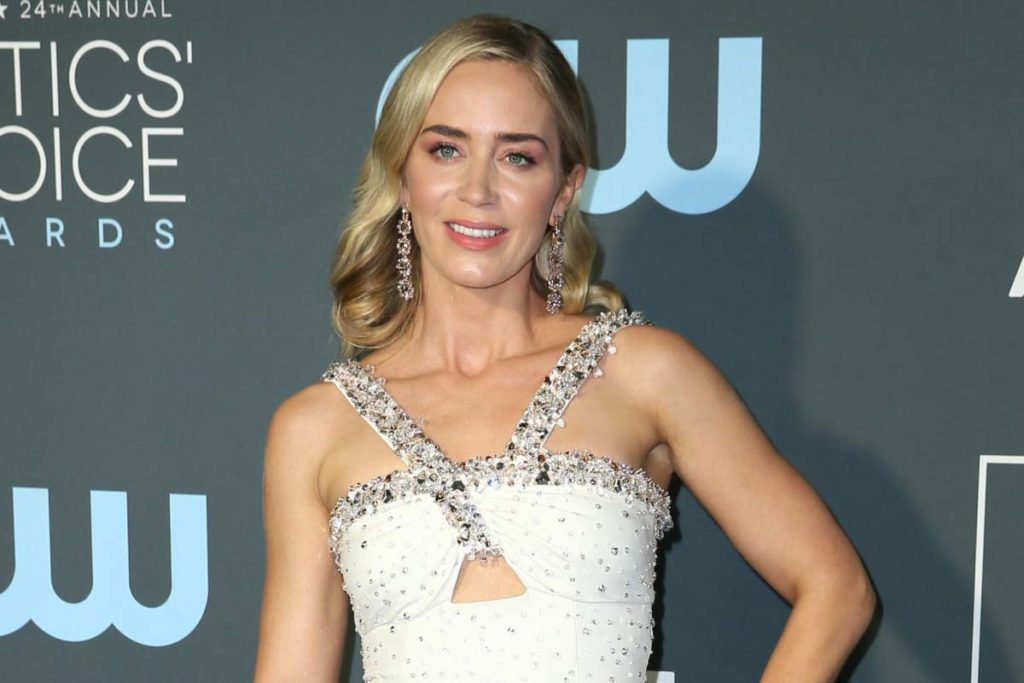 Emily’s full name is Emily Olivia Leah Blunt, born on 23 February 1983 in Roehampton, London, England. She was born in a family where her parents had a different profession. Her mother is a teacher and an ex-actress named Joanna Blunt. While her father is a barrister named Oliver Simon Peter Blunt. She was the second child of her parents, who grew alongside her three siblings, two sisters. And their names were Felicity and Suzanna and a brother named Sebastian. She is currently 37 years old with a Pisces sun sign.

Emily Blunt holds the nationality of Britain, and as per her ethnicity, she is White. Her religious views are Anglican/Episcopalian. Besides this, she stands 5 feet and 7½ inches (1.71m/171cm) tall and weighs around 52 kg (115lbs). Her body measures 34-23-35 inches, respectively. Moreover, Emily has a beautiful and striking pair of blue-colored eyes with dark brown hair color.

Emily Blunt completed her studies at Ibstock Place School. In her childhood days used to stammer due to which she grapples with this problem for many years. Her teacher advised her to attend an acting class to build up her confidence. She did as per her teacher and overcame her stuttering problem. For her future studies, she attended a private arts college named Hurtwood House. She often participated in her college acting programs. She was signed by one of the agents while she was in her acting program. 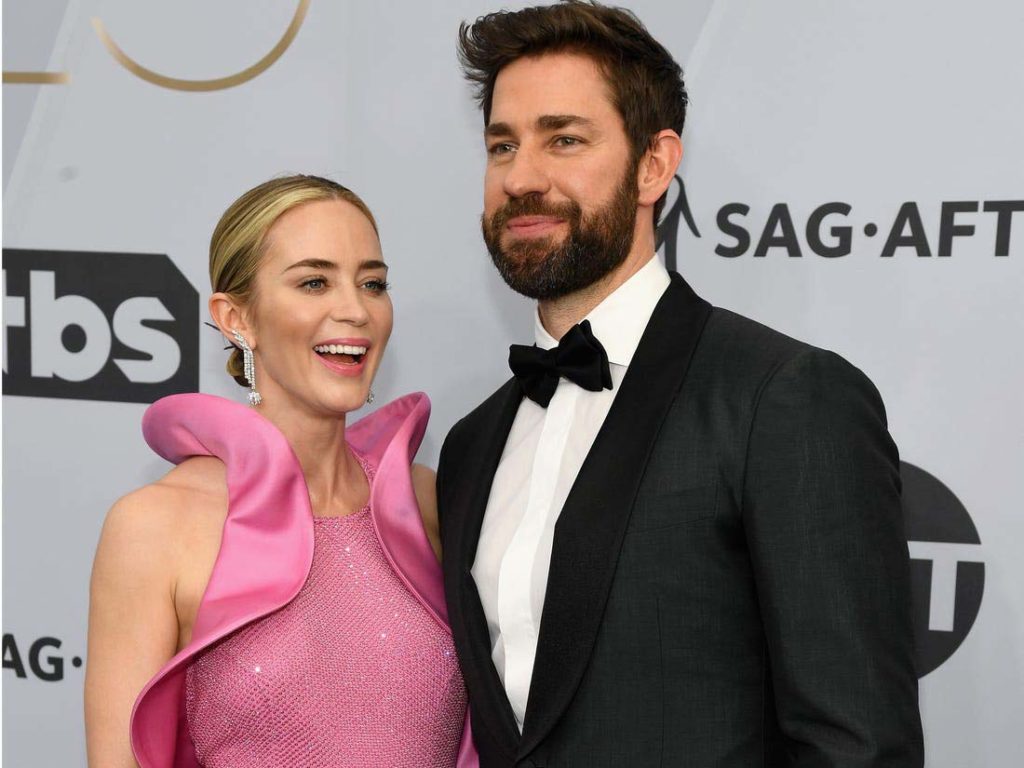 Emily Blunt has her first relationship started in 2005 with Michael Buble, who is a Canadian singer. They ended their relationship in 2008 after three years. Her second relationship was with John Krasinski, which started in 2008. This relationship became a marriage on July 10, 2010. They married in Italy, and currently, they are living in Brooklyn with their two daughters.

Emily Blunt has a huge fan following due to which there are many fan page accounts in her name. But she does not have any official Facebook, Twitter, and Instagram pages and accounts.

Emily Blunt landed her big-screen role in a 2004 film called ‘My Summer of Love’ as Tamsin. She then appeared in a two-film in 2006 called ‘The Devil Wears Prada’ and ‘Irresistible.’ She received appreciation from her audiences and critics for her amazing acting roles. Her next films in 2007 were ‘Wind Chill,’ ‘The Jane Austen Book Club,’ ‘Dan in Real Life,’ and ‘Charlie Wilson’s War.’ At this time, she had already gained prominent fame. In 2008, she featured in two different films like Valerie and Norah in ‘The Great Buck Howard’ and ‘Sunshine Cleaning.’

Moreover, she also starred as Queen Victoria in ‘The Young Victoria’ in 2009. Through this film, she received a nomination for Best Actress, Critics’ Choice Movie Award, and the Golden Globe Award.  In 2010 and 2011, she played movies like ‘The Wolfman’ which is a horror film, ‘Gulliver’s Travels’ which is a fantasy adventure comedy film, ‘Gnomeo & Juliet’ which is an animated film where she had a voice role, ‘The Muppets’ where she had a cameo role and many more.

Likewise, in 2012 she had three different films called ‘Looper,’ ‘The Five-Year Engagement,’ where she played opposite Jason Segel, and ‘Arthur Newman’ where she had shared the screen with Colin Firth. Since 2014, she has mostly played a voice role in films. To name a few, they are ‘The Wind Rises,’ ‘Animal Crackers,’ ‘My Little Pony: The Movie,’ and ‘Sherlock Gnomes.’ Meanwhile, she also did ‘The Huntsman: Winter’s War’ in 2016 and ‘Mary Poppins Returns’ in 2018. She has recently been working on her upcoming and unreleased films ‘Jungle Cruise’ and ‘Wild Mountain Thyme.’

Emily Blunt started her television career in a 2003 television film called ‘Boudica.’ The same year, she became a cast in two TV series named ‘Foyle’s War’ and ‘Henry VII.’ Likewise, in 2004 and 2005, she played as Linnet Ridgeway Doyle and Camano in ‘Agatha Christie’s Poirot’ and ‘Empire.’ She also was featured in a television film the same year and in the next year called ‘The Strange Case of Sherlock Holmes & Arthur Conan Doyle’ and ‘Gideon’s Daughter’ respectively. In 2009, she played the voice role in ‘The Simpsons’ and ‘Angelina Ballerina: The Next Steps.’ Her last appearance on TV was ‘Saturday Night Live‘ in 2016. 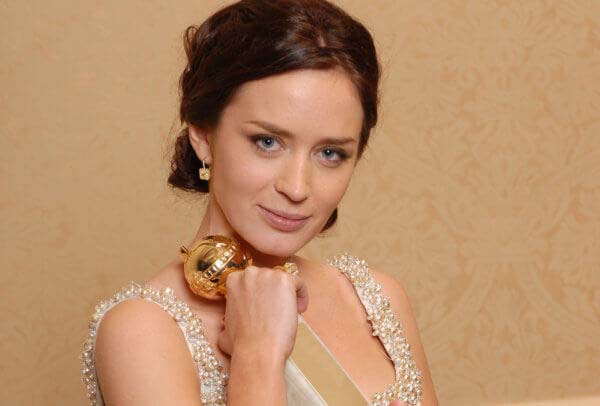 Emily Blunt has received nominations and prestigious awards in her career lifetime to date. She has won awards like the Critics’ Choice Movie Awards in 2013 and a Golden Globe Award in 2007. Likewise, she had also bagged Gotham Award in 2012 and Satellite Award in 2015. Similarly, she has also won Saturn Award and SAG Award in 2012 and 2019, respectively.

Net Worth of Emily Blunt

A British-American well-known face Emily Blunt has a huge number of fan following all across the world. Her net worth as of 2020 is $25 million.