Who is Matthew McConaughey?

Matthew McConaughey is an American actor and producer who has enthusiastically worked in this entertainment field since 1991. He had an early interest in acting, which made him learn communication. Apart from his brothers, he did not continue his father’s business. Instead, he decided to pursue his career in acting. Initially, he began his career by appearing in commercials and a few minor roles. Eventually, he received his breakthrough role, and now he is one of the leading actors in the Hollywood industry. Likewise, this talented actor had played in various films and series. He is well-known for his portrayal of Steve Edison in the movie ‘The Wedding Planner.’ 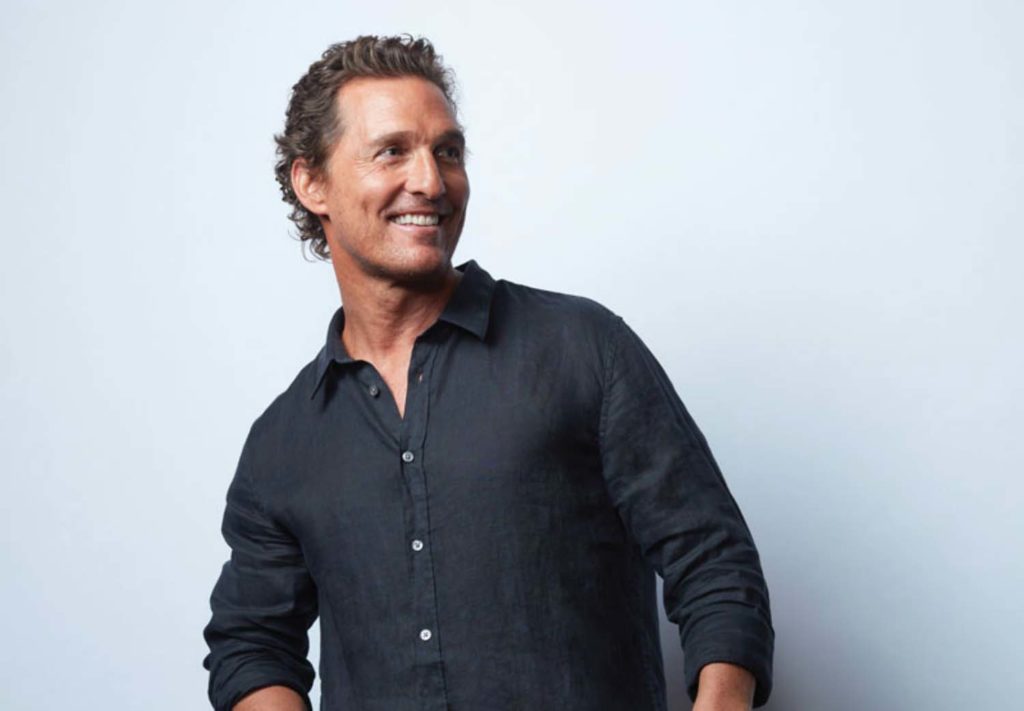 Matthew’s full name is Matthew David McConaughey, born on November 4, 1969, in Uvalde, Texas, United States. He was born to his middle-class parents James Donald McConaughey and Mary Kathleen. His father was a gas-station owner and oil supplier, while his mother was a kindergarten teacher. Moreover, he grew alongside his two elder brothers Michael “Rooster” McConaughey and Pat McConaughey, who is adopted. Additionally, he is now 51 years old with a Scorpio star sign.

Matthew McConaughey holds an American nationality. As per his ethnicity, he belongs to White and is of German, Scottish, Swedish, Irish, Welsh, and English ancestry. Moreover, his religious views are Christian who visits a non-denominational church. Besides this, he stands 5 feet and 11¾ inches (182cm/1.82m) tall and weighs around 82 kg (181lbs). He has an athletic body type measuring 46-16-34 inches, respectively. Additionally, he has a pair of blue-colored eyes with light brown hair color.

Matthew McConaughey attended Longview High School and moved to Warnervale, Australia, in 1988 after his high school graduation. This actor lived in Warnervale for a year as an educational exchange program. Likewise, he then enrolled at the University of Texas at Austin College Of Communication. He graduated with a Bachelor’s degree in Radio-Television-Film in 1993.

Apart from this, McConaughey’s hands are also in charity. He has established an organization called K Living Foundation. This organization helps teenage kids by allowing them to make the right choices. 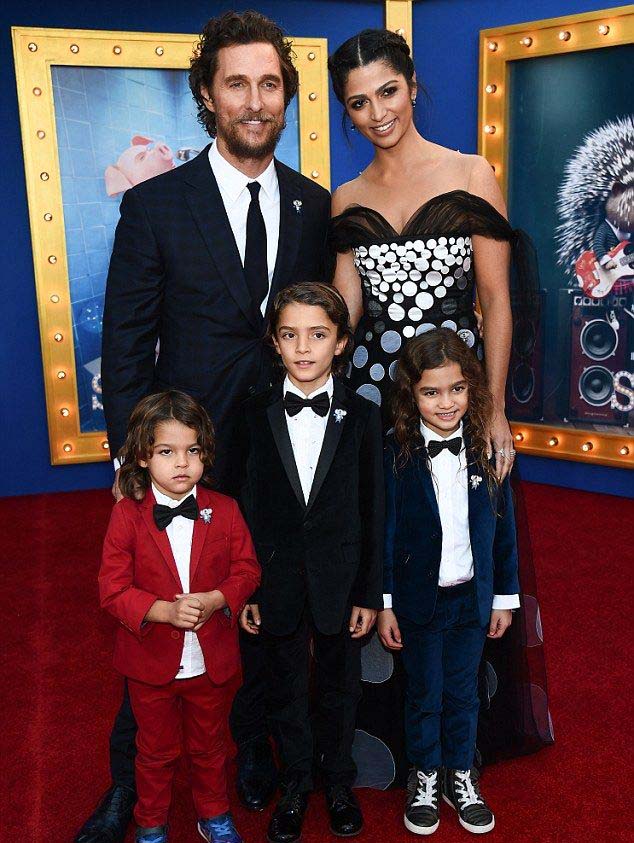 Matthew McConaughey landed his first TV role in the 1992 series ‘Unsolved Mysteries’ as Larry Dickens. He then appeared in ‘King of the Hill’ in 1999 and had a voice role. The next year, he featured himself in an episode of ‘ Sex and the City.’ Likewise, he hosted the late-night live TV comedy show ‘Saturday Night Live‘ in 2003 and 2015. Similarly, he also was one of the casts of the exhibition ‘Freedom: A History of US’ in 2003. Matthew then appeared in 3 episodes of ‘Eastbound & Down’ which ran from 2010 to 2012. His last played TV series is ‘True Detective’ where he played Rustin Cohle in 2014. Moreover, he was also an executive producer of this series.

Talking about his film career, Matthew landed his debut film in the 1993 film ‘My Boyfriend’s Back.’ The same year, he appeared in the coming of age comedy film ‘Dazed and Confused’ as David Wooderson. This role earned him popularity and critical acclaim. Likewise, he was seen in movies with minor roles like ‘Texas Chainsaw Massacre: The Next Generation,’ ‘Boys on the Side,’ and ‘Angels in the Outfield.’ In 1996, he became one of the casts of the thriller film ‘A Time to Kill,’ where he played the role of a lawyer named Jake Brigance. This film made him receive a big break, for which he received critically acclaimed too. Likewise, the next year he played in the historical drama film ‘Amistad.’ This film received an Oscar nomination, and also the reviews were positive from the critics.

From 1998 to 2001, he played in four different films, out of which the romantic comedy film ‘The Wedding Planner’ did very well. The film was a massive commercial success where he played Steve Edison opposite Jennifer Lopez. He then starred in various movies with different genres. In 2005, he served as an executive producer and also enacted as Dirk Pitt in the film ‘Sahara.’ Likewise, his other films from 2006 to 2011 were ‘Magnificent Desolation: Walking on the Moon 3D,’ ‘We Are Marshall,’ ‘Surfer, Dude’ where he also was producer, ‘The Lincoln Lawyer,’ and many more. In 2012, Matthew appeared in the comedy-drama film ‘Magic Mike’ as Dallas. This film was a critical success and won different film festival awards.

Furthermore, in 2013, he starred in a biographical drama film ‘Dallas Buyers Club’ as Ron Woodroof. This role earned him a different prestigious award under the Best Actor category. His other film is a science fiction movie named ‘Interstellar’ also received good reviews in 2014. Likewise, some of his other notable films are ‘The Free State of Jones,’ ‘Gold’ in 2016, ‘White Boy Rick’ in 2018, ‘Between Two Ferns: The Movie’ where he had a cameo role and ‘The Gentlemen’ where he also served as co-producer in 2019. This film starred different actors and actresses like Charlie Hunnam, Henry Golding, Michelle Dockery, Jeremy Strong, Eddie Marsan, Colin Farrell, and Hugh Grant. Moreover, he has also featured in three music videos with three different artists. 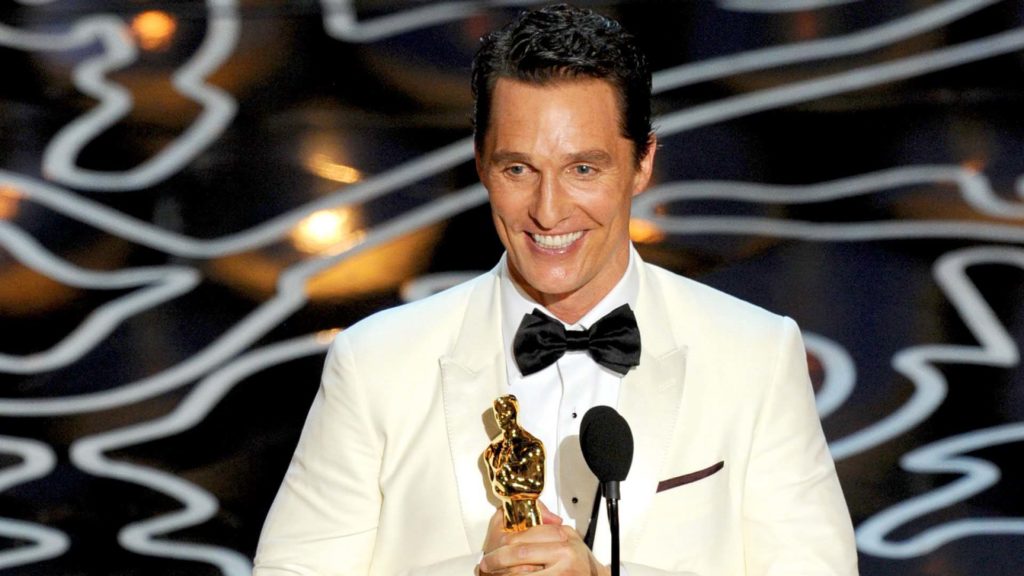 Matthew McConaughey has received a total of 86 nominations, out of which he has successfully won 37 of them. Some of the prestigious awards that he has won for his film ‘Dallas Buyers Club’ are Academy Award, Golden Globe Award, EDA Award, Critics’ Choice Movie Awards, Dorian Award, Screen Actors Guild Awards, and the MTV Movie Award in 2014. Likewise, he has recently won the Village Voice Film Poll Award for his film ‘Magic Mike’ in 2012.

Net Worth of Matthew McConaughey

Matthew McConaughey is regarded as one of the wealthiest actors in the Hollywood film industry. His estimated net worth as of 2020 is $100 million.